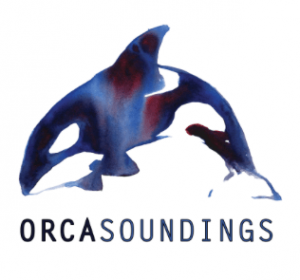 Orca Soundings brings the lifeworlds of the resident orca whales of the Salish Sea to the surface. It is an art project using whale sculptures and their human guardians, in a performance that reflects the wide spread knowledge of  – both traditional and scientific – and love for these whales.
Every person involved in the the project is linked to an individual whale and bring their own specific skills and story to the project.  The stories of the whales and people will be captured in film, art, song, performance and social media.

“With the population of resident orca now down to 78 individuals, our little human group mirrors the whales in more ways than just numbers and range of ages.  Like us, these orca have complex cultures and diverse languages.  They care for their families and are led by matriarchs, long after their reproductive years.  They have rituals for sharing territory.  They sing, share their food, play, court, nurse their babies and, like us, grieve at loss.”  –  Briony Penn (Orca Ino L-54)

From May 25 – 28, Orca Soundings joined the Walk 4 the Salish Sea, a 4-Day epic mobilization in an effort to protect our coastal waters, 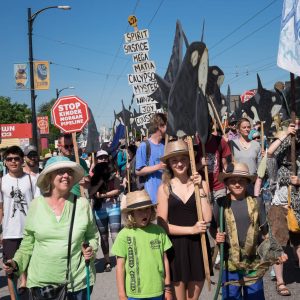 walking in solidarity with indigenous communities across BC from Songhees territory in Victoria to Tsleil-Waututh territory in Burnaby (Kinder Morgan Terminal). The Super Pod appearance breathed life and lifted spirits for all who attended and observed.
As Jessie Toynbee, lead orcanizer of the Super Pod event shared “Our Super Pod was an outstanding success, making a compelling statement in the fight for the survival of the Southern Residents.  It was a remarkable display of creativity, spirit and determination.  The Super Pod was such a powerful visual, and provided a commanding icon for the final leg of the 78 km Walk 4 the Salish Sea.  It is our dream that this is just the beginning for Orca Soundings.”

Become an Orca Guardian and help raise awareness of our Southern Resident Orca with a donation today.  Select Orca Soundings from the drop down menu.