Poetry in Motion: An Introduction to Somatic Sovereignty 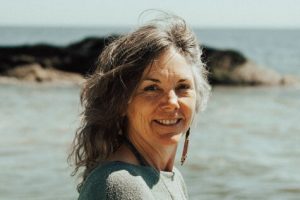 I’ve long held a sneaking suspicion poets might have a better grasp of the human body than any anatomy specialist, medical researcher or other expert in the field. When I first heard Mary Oliver’s lines, You do not have to be good, you do not have to walk on your knees for a hundred miles repenting through the desert, You only have to let the soft animal of your body love what it loves, I was smitten.

What does the soft animal of my body love? I wondered, and as we know with wonder – it takes time.

Shortly after hearing Oliver’s poem I was introduced to something called Continuum Movement which changed not only my direct experience of the body but my entire life.

It was 1994 and Susan Harper came to Vancouver to teach a workshop called Waves & Whispers. The image on the flyer was evocative for its time, a naked woman’s body lying on her side at the edge of the ocean, a gentle wave rolling over her hips and thighs. I recall the image was printed in black and white on soft mauve colored paper. No face or breasts were visible, just the soft yet pronounce serpentine shape caressed by waves. It was difficult to tell where one ended and the other began.

My body was firm, strong and well, if I’m to be honest – armored. My back was broken at 18 in a car accident. I had spent six years getting fit in the burgeoning fitness movement of the late seventies, early eighties and after thousands of sit-ups and miles around the world on exercise bikes and Concept II rowers I was taut and lean, sporting a six pack and bulging muscle on my boney 5’8’’ frame.

Most people don’t actually know the modern fitness movement came out of World War II training camps. The repetitive tasks of sit-ups, push-ups, chin-ups and short sprints were to train humans for combat and war. It’s interesting to me that all of these exercises are ups. It seemed to me that gravity was something to defy. More about that another time!

Pause for a moment.

If this was the intent and background behind the exercises offered still to this day, based on machine like straight line movements, what kind of human are we wanting to create?

For that is exactly how humans’ evolve, through thought, movement, posture and expression.

In 1989, at twenty-five I moved from Ontario to British Columbia and discovered Yoga. But not so fast! I entered the practice with an already armored body, strong and used to pushing beyond the threshold of care. Although yoga began to soften many of the constraints, it was still possible to override my inner sensations and perform asana with success and quite possibly even a bit of pride, dare I say.

Fast forward to the first day of Waves & Whispers with Susan Harper, when I witnessed her undulating body moving in wave like motions, as she made soft shapes of the breath through her open throat and mouth. Tears streamed down my dry cheeks, rivulets forming larger streams, dripping on to my chest as my lungs heaved with longing for – well, what I remember is the line from when Harry Meets Sally – I want what she’s having.

I remember a feeling of inner conflict between two forces, at the time they felt opposing.

After years of disciplined movement practice I was drawn into Continuum’s inquiry of the fluid dynamics. I followed Susan back to California where she and Emilie Conrad, the founder of Continuum Movement were offering a workshop All About Movement.

Again, I found myself weeping in grief at the loss of the intrinsic intelligence of the body through trauma and then repetitive movements that were supposed to be good for me. A part of me thought I was betraying yoga, engaging in these organic movements coming through me. An inner voice affirmed, you are no longer betraying life.

Continuum Movement is an inquiry based practice that honors the intrinsic intelligence of the organism we call a body. What does this mean? While the direct experience is better than any words put to it, I’ll attempt a short introduction.

The human body is between 60 and 75 percent water depending on age, health and mobility.  Continuum Movement practices are based on the fluid dynamics found in oceans, rivers, cosmos and human body.  All water is viewed and experienced as one fluid resonant field.  Thus, the practices and inquiries are offered to experience the evolving human organism we call body as a fluid resonant relational being. Consciousness expands in awareness of ourselves as nature, intelligent and unfolding.  Nature, not as something we are a part of, but rather nature as what we are.

Both gentle and dynamic breaths, sounds and movement shapes and gestures are offered as invitations to explore. As the fluid becomes more enlivened through these along with the awareness and interest of the practitioner, the body becomes resonant with the waters of life again. No longer dammed or damned by the repetitive military movements, blood, organs, lymph, spinal fluid and even bones are liberated from the constraints of human thinking, cultural hypnosis and long held beliefs about what a body is.

Out beyond ideas of right-doing and wrong-doing, there is a field, I’ll meet you there. Says Rumi, a 12th Century Sufi Poet.

The body, we call a body, or more recently soma (living body) – is experienced as the vessel through which the bio-intelligence of the origins of life can be experienced and expressed. Not only moving but being moved, old inhibiting habits gently fall away in the revelation of new experience and information.

Through this way of inquiry, we re-enter the river of unfolding experience in the present moment. Moved by the waters of life, we can experience a direct sense of immersion in our oceanic origins.

Perhaps this is what was suggested in the timeless saying, You can never step into the same river twice.

Maybe this is what John O’Donohue was curious about when he said, I would love to live like a river flows carried by the surprise of it’s own unfolding.

Somatic Sovereignty is an inquiry-based practice, which draws on over two decades of practice and facilitating Yoga, Continuum Movement and perceptual inquiry. It is an invitation to explore, discover, and maybe recover a direct experience of ourselves as biological beings, nature based and paradoxically both sovereign and inter-dependent with all of life!

Somatic Sovereignty – Theme: The Body is a River