Walk Around the Block 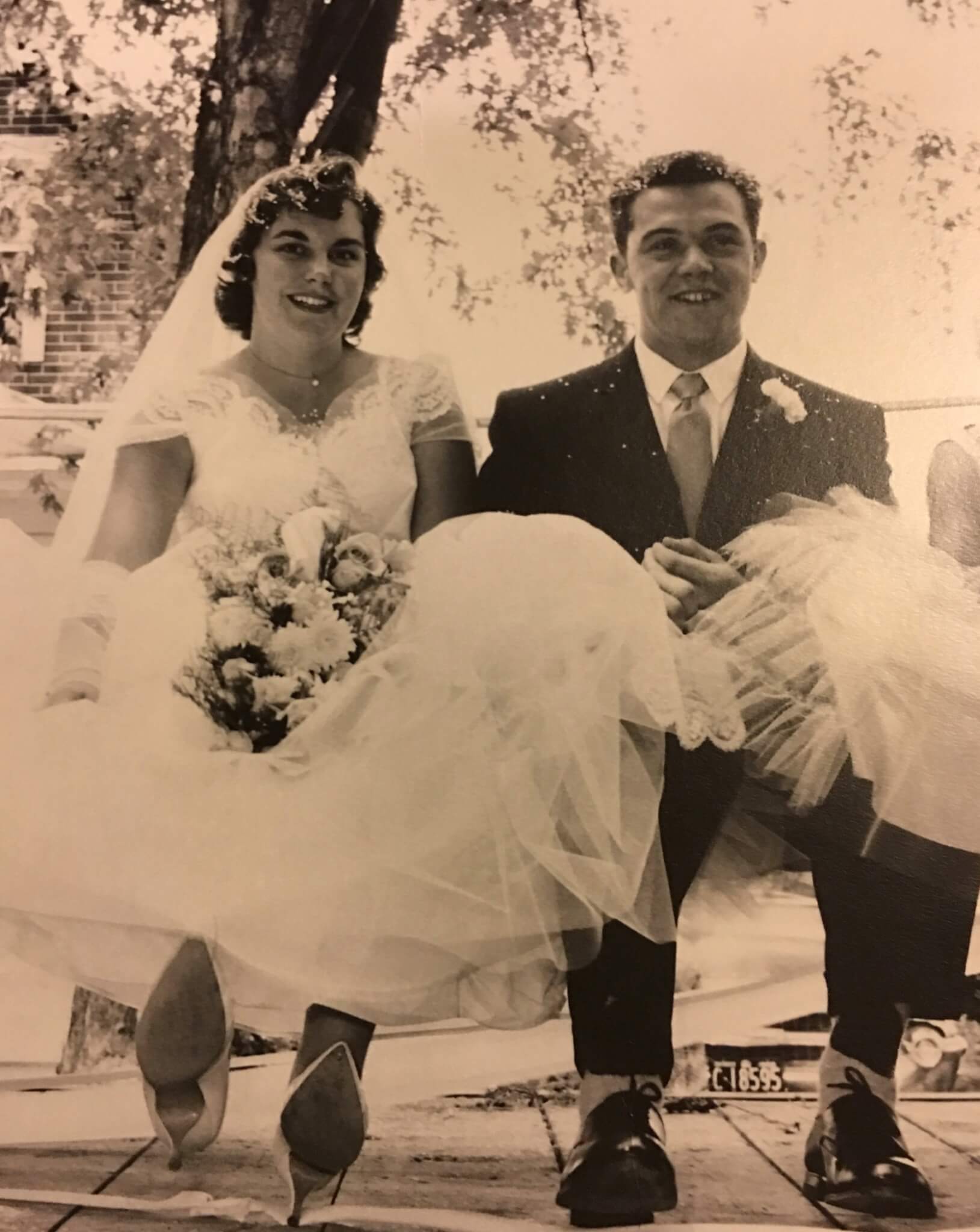 A Walk Around the Block

This summer I had the blessing of returning to the place of my birth in Ontario to celebrate my parent’s 60th wedding anniversary. 170 family and friends filled a community hall my parent’s had actually fundraised to build in the 80’s, along with adjacent baseball diamond behind, where my brother and I used to play.

As a Wedding & Funeral Celebrant I spend a lot of my days interviewing couples and writing the story of their love, or listening as families share the stories of their recently deceased loved ones.

Although I knew bits and pieces of my parent’s love story heard in pieces over the years, I decided to reach out and see if they would be willing for me to write something in this regard for the celebration. Both readily agreed, with my mother responding to my questions in a five page impeccably handwritten and mailed letter, and my father calling me and saying, Ask away!

Both, natural storytellers, I took their answers and wove them together into a Love Story I could share as a way to honor their 60 years of life and love together. As I changed from addressing them as Mom and Dad to Pat and Fred in my writing I immediately felt a freedom of expression, as contradictions and what I used to judge as difficult oppositions between them turned into quirky paradox and playful exchanges of dialogue and life experiences.

As I told the story of an army brat, who couldn’t really tell you where exactly she was from as she had moved so many times and attended so many schools she had lost track, and a country boy who was raised by a village, where freedom to be and wander reigned, I felt the meeting of these two aspects within myself.

As my only brother Doug and I collaborated at first over email and phone, living 3000 miles apart, and then in person in the days prior to the celebration, I began to experience a deeper appreciation for the differences he and I have attempted to negotiate through the more difficult early years as kids and teenagers to adults living on either side of the country. The space seemed necessary throughout the last thirty years, and now, in these moments as we collaborated on our parent’s party our differences seemed to align into a humorous and humble honoring of our mutual and yet very different experiences of our roots. Doug joked we should have t-shirts made with the yin/yang symbol on them – I didn’t know he even new what this was!

After Doug and I opened the evening and I shared their love story, our parents came to the stage. Dad took the microphone into his hands, my mom’s hand in the other – This is a celebration of life, he said.   Most people do it when the ashes are in an urn on the table. Pat and I decided to do it now – and to spend our children’s inheritance doing it! The crowd of people roared with laughter and applause.

He waited for the applause to settle. This night couldn’t go on if we didn’t take a moment to acknowledge all of the ones missing from this hall. I’d like to have a moment of silence, he declared. The hall fell silent, not a chair moved or a throat cleared.

Too often, as a celebrant I hear folks push for a celebration of life and their desire to diminish reference to what they call “funery” things, neglecting the reality that even in a wedding, there are tears of grief to be shed and one’s who are not present to be honored.

In that moment as I stood on the stage with my family, I felt the presence of the countless family and friends who have died over the years, many of my father’s close buddies strangely dying in their 50’s. John and Cedric, Gary and Irwin, Johnny and Bill, Carm and Joe, Archie and Jimmy, Heather and Rita, and many more. For a moment, the living and the dead were held with appreciation and care.

As I write this sitting on the edge of the west coast, Pacific Ocean lapping at the shore, bumble bees flitting among summer’s last blossoms, the scent of autumn in the air, and relishing in the afterglow of my parent’s celebration of life, I hear my father’s words breaking the silence,

My parents had hired one of Canada’s top Rock’n Roll bands, Eddie and the Stingrays. As my family left the stage, Band members, Eddie and Buddy (who I used to go to highschool with!) stepped forward with their guitars poised and ready, as a friend of my parents took the microphone to introduce the first song:

It seems that every young couple has a favourite song,- a song that reminds them of something special in their relationship.  For Fred & Pat, it was Rock Around the Clock, by Bill Haley and the Comets.  We saw them jiving a couple of years ago and I can just imagine what they would have looked like as a young couple in love.

This song refers to 24 hours of passion & excitement.  Tonight we are celebrating 60 years of love, commitment, responsibility, and leadership. We decided the lyrics needed to be updated.

As seven more of my parent’s friends stepped from the sidelines onto the dance floor dressed in white blouses and poodle skirts, white t-shirts and slim fitting pants, cigarettes resting on the guys ears, the band began to play Rock Around MERC Hall tonight.

Pat, nursing a sore foot and Fred a recent injury to his arm, began to jive, slow and steady, glowing in the embrace of friends and family, alive and well…. and dead too,