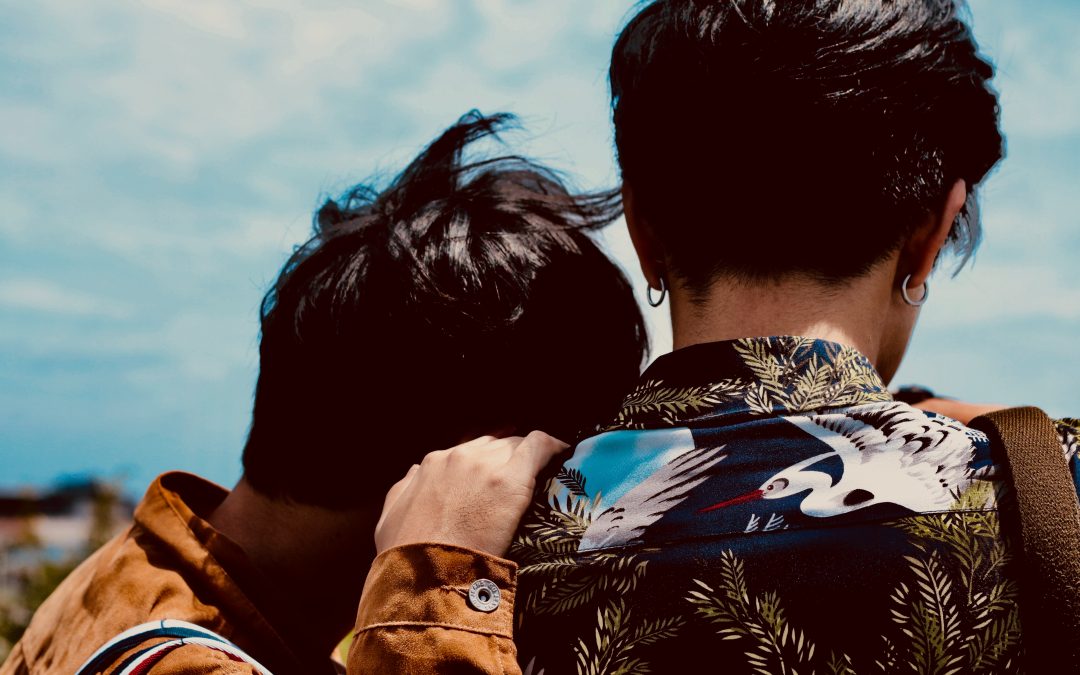 We heard them first, voices – laughter and song, words indistinguishable.

“These young ones are having such a difficult time with physical distancing!” I said to John, as we walked with our dog Sophia.

It was mid-March, COVID19 our new reality, and with every day a changing scene of information, death tolls worldwide, fear compelled many to check the news each morning, and more locally – Dr. Bonnie Henry each day at 3 p.m.

As voices grew louder, John and I turned left, moving towards the faintly familiar melody, words still unclear. We rounded the corner, expecting to find a group of teenagers, and were surprised to see several couples and individuals our age, standing at a safe distance, singing.

Immediately one, then two, then all of them began to wave their hands in welcome.  Breaking through the lyrics of the song with calls of – come join us, sing with us!   Welcome!

We stepped into the middle of the open street with Sophia, and joined in as the words of the familiar song easily rolled off our tongues.  It was shortly after 7 p.m. and although we had heard pots and pans banging outside acknowledging with gratitude health care workers on the front lines of the growing pandemic, we had not yet engaged.

When the song finished everyone began to disperse with thank you’s and a final round of pot banging and cheers. One woman loudly drummed on a djembe and encouraged us to return, as we waved our thanks, continuing on to the dog park.

I remember feeling warmth, carrying the words of the song and a feeling of welcome for the rest of the evening. Having recently moved to Victoria at midlife, I had wondered how it would feel to arrive into this new city, find and create community again.

We showed up the following evening to meet a growing group of people gathering on the neighbouring street. After 7:00 p.m. banging of pots and shouts of gratitude, the group always sang a song with a small sound machine for back up.

At some point John and I realized we might have abandoned our own street. At 6:55 p.m. the following night we went out onto the sidewalk in front of our home, John with his ladle and metal strainer, me with my hand drum, and Sophia on her leash, calling our neighbours to join us.

Soon more and more neighbours arrived – families with children of all ages and elders, couples and individuals along with a guitar, ukulele, flute, bells, tambourine, hand drums and rattles. After the 7 p.m. ritual of thanking care workers everyone stayed to sing a song or two.

As March turned into April the two streets merged as our numbers swelled in the nightly gatherings, sounding instruments honouring the front line workers followed by sharing songs anyone was free to suggest.

Wonderful World by Louis Armstrong, Come Together, Here Comes the Sun, and All You Need is Love by the Beatles.

On April 19th, with news of the shootings in Nova Scotia, I felt overwhelmed with grief at this senseless act. Hesitant to join in the ritual but following the ease built in from nights of repetition I slipped out the front door with my rattle. After our gratitude I requested Hallelujah with KD Lang accompanying us for our neighbours in the East.  This spontaneous and collective moment of sharing grief called several more neighbours to join in with moving harmonies.  Who knew what beautiful voices were behind the doors of the homes on our street?

A growing orientation to 7 p.m. marked our days.

Several shared emails to make suggestions for songs and then a neighbour’s 50th Birthday included a car drive-by of her friends, and a boisterous round of Happy Birthday from all directions.

As April turned to May we celebrated a 2 year old, 7, 13 and 15 year olds birthdays, a baby was welcomed and a few more numberless birthdays for those no longer counting.

Bob Dylan’s birthday was celebrated with a week of Dylan tunes, and we reclaimed Neil Young’s songs from Trump’s grip … if only in our own hearts and minds, followed with some Bob Marley, Sam Cook and Nina Simone honouring Black Lives Matter.

The nightly ritual was compelling and comforting and a daily dose of goodness, as one woman living alone acknowledged she went to sleep with good song lyrics on her mind rather than an over orientation to growing fears as our world continued to change.

A sweet three year-old girl from across the street developed a loving bond with Sophia our dog, both visible and palpable to everyone. It was like a dose of oxytocin – the love hormone for those of you not familiar!  On her birthday, Sophia delivered a handmade card attached to her collar, running to her with exuberance and joy!

Fridays were for dancing!  One of the neighbours and her seven-year-old daughter made a playlist we could parade and dance to, as we sometimes took turns at one street or the other.

With Phase 2 opening in relation to the pandemic, our numbers diminished on some evenings as folx began to change their movement patterns. Into June we shifted to Mondays, Wednesdays and Fridays, not ready to let our sweet chorus and connection go.

July 1st found us gathering for a street celebration when I became the recipient of the chorus’s glowing rendition of Happy Birthday, receiving hand made cards and bouquets of flowers set onto a table for me to receive.  I felt held in an embrace of friendship, timeless and true to our human need for belonging and human care.

It’s mid August, and we continue to gather on Fridays – sometimes a handful, swelling to a dozen or more at times.  There’s no feeling of obligation but rather a genuine interest to pause at the end of the week, give thanks, and continue to sing what has become our theme song, the one John and I first heard as we rounded the corner that evening back in March … expecting to find a group of rebellious teen agers and instead finding a group of humble adults with care in their hearts and welcoming words on their lips,

Lean on me, when you’re not strong
And I’ll be your friend
I’ll help you carry on
For it won’t be long
‘Til I’m gonna need
Somebody to lean on  (Bill Withers)