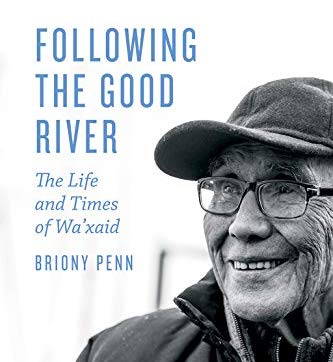 A book by Wa’xaid (Cecil Paul)

Who better to tell the narrative of our times about the restoration of land and culture than Wa’xaid, (the good river) or Cecil Paul, an Xenaksiala elder, who pursued both in his ancestral home, the Kitlope — now the largest protected unlogged temperate rainforest left on the planet.

Paul’s cultural teachings are more relevant today than ever in the face of environmental threats, climate change and social unrest while his personal stories of loss from residential schools, industrialization and theft of cultural property put a human face to the survivors of genocide.

The beauty of paradox and forgiveness is Wa’xaid’s traditional offering to the world: the church that removed him from his family, rescued him from the streets; the industry that threatened the Kitlope, fed his family and gave up their logging rights; the man that raised his stolen child, helped save his valley; the nation that took his pole, brought it back.

The Centre for Earth and Spirit partnered with Briony Penn to support the research, writing and launch of her book with Haisla Elder Wa’xaid, Cecil Paul.

“Build a canoe and it will be supernatural and no matter how many people will come aboard to help you paddle to save your place of birth, it will never be full.” .

Some Relevant Articles From The Blog On This Topic

Following the Good River: An Update

AN UPDATE Following the Good River:  The Life and Times of Cecil Paul      As told by Briony Penn with Cecil Paul (Coming out April 2019) This spring Cecil and I travelled up to Kispiox with Cecelia Reekie, his daughter, to visit Roy Henry Vickers. The meeting was a...

by Briony Penn This May I traveled up to Kitimaat village to spend some time with Cecil Paul and his family to go over the stories that we are preparing for the book. I spent part of the month in the Kitlope where spring was just breaking through the snow on the...